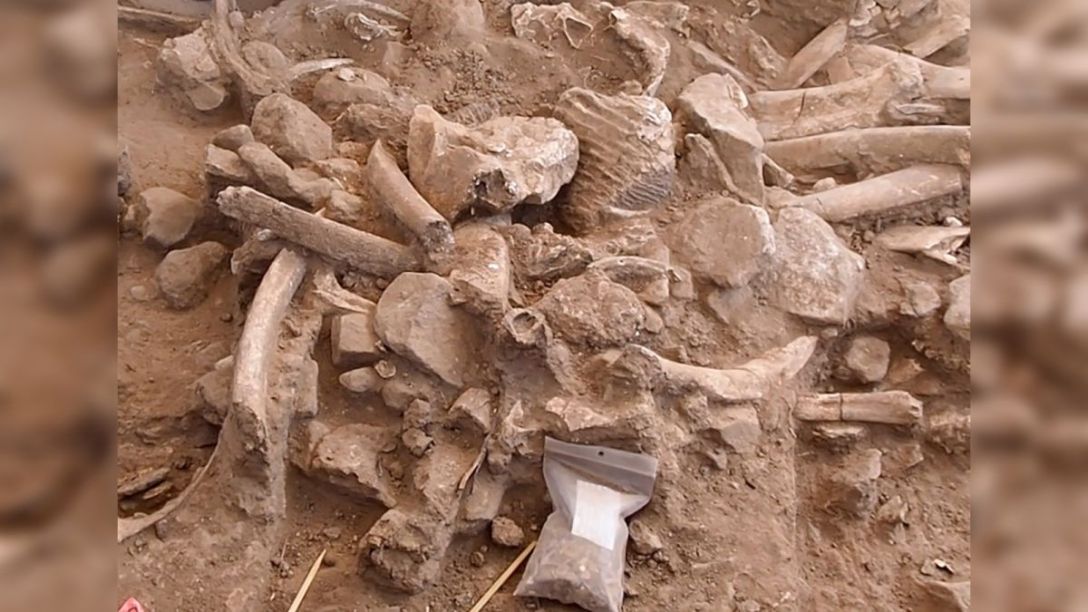 Archaeologists from the University of Texas, excavating at the Hartley site in New Mexico, are claiming they have found evidence of humans butchering mammoths 37,000 years ago. They found the bones of two mammoths in a large pile. Carbon dating the collagen in the bones gave a date between 36,250-38,900 years old. The archaeologists claim that the bones had been handled by humans. Some bones look like they were made into human knives. Other bones look like they were broken by blunt force, and puncture marks on the ribs perhaps made by humans to get to nutrients.A boulder and some first sized rocks could have been used to break the bones. There could have been a controlled fire which researchers say cooked the mammoths, along with smaller animals and fish. Crystallized ash in the sediment could have come from a fire to cook the mammoths. The researchers at the site used high-resolution CT scans and scanning electron microscopy.

But scientific critics of this claims are pointing out there is no definitive evidence of human activity. Weathering, trampling, sediment layering, landslides can cause this kind of damage to bones. There is no unambiguous human tool and no human remains at the site, no evidence of humans directly at all.

The research was published in Frontiers in Ecology and Evolution.

(My note; I always look to absolute proof of humans being involved such as human DNA evidence, Human bones or teeth, actual human tools, some kind of human habitation proof. No research like this can withstand the critiques without this kind of evidence. Pre-Clovis sites have been proven at Monte Verde in Chile and Paisley Cave in Oregon and perhaps the Page-Ladson site in Florida, but the proofs there are far more extensive and prove human activity at these Pre-Clovis sites. The research at the Hartley site is far from proven.)

Livescience.com has the report with photos here:
https://www.livescience.com/mammoth-butchering-site-new-mexico

View all posts by mikeruggeri